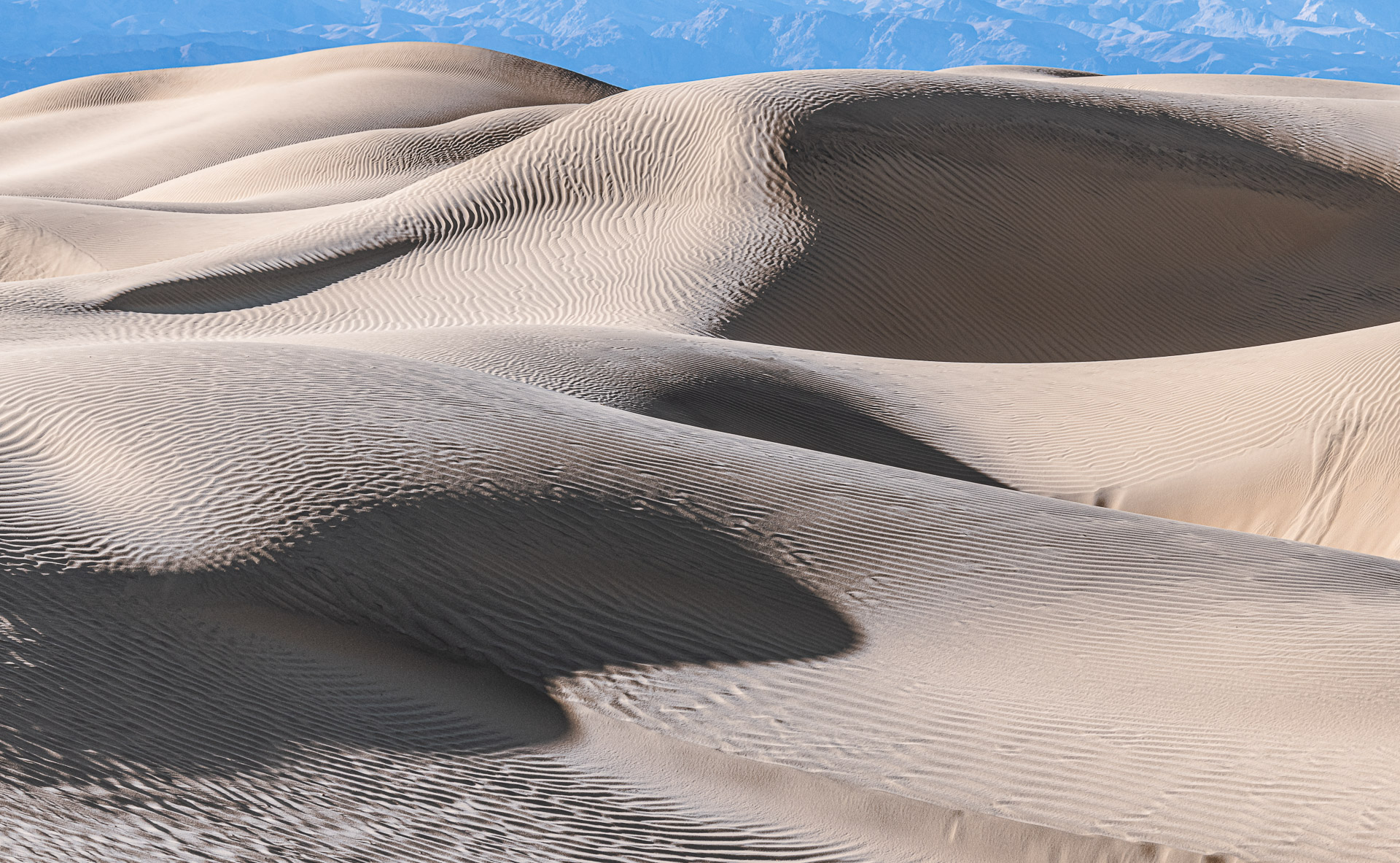 During my last visit to Death Valley, we did not have time to visit any of the sand dune areas so I was very excited to learn that the instructors for our late afternoon session (see Part 1 for Out of Chicago’s Out of Death Valley conference info) would be to the Mesquite Falt Sand Dunes area.

Our instructors for this session were Michael Frye and William Neill.  They told us to be ready for a bit of a trek into the dunes and that we would be staying until after dark to shoot the night sky!

Mesquite Flat Sand Dunes was about a 35-minute drive from The Ranch at Death Valley Resort where the conference was being held.  We pulled the vehicles off the road at a spot where we could just see the dunes in the distance.  We loaded up our packs and started walking.   Our instructors used a hand-held GPS as once on the dunes it is very difficult to find your way around.  We walked about 3/4 of a mile through scrubby salt flat before stepping foot on the first dune.  We walked in single file along the ridges of the dunes to make as few footprints in the sand as possible.

I set up my tripod and started to look around.  The dunes were everywhere!  I was looking at the wide view and then trying to narrow my point of view to a more intimate view.  I immediately started to see contrasts in color and light.  The sun was starting to get lower in the sky so the shadows were deepening.

The textures were so varied it was hard to pick out a spot to shoot.

As always I turned to look behind me and I saw my lengthy shadow!

I was really getting into seeing the curves and the shadows that vary in every direction you look and they changed as the sun moved lower in the sky.

At this point, I decided to pull out the Nikon Z6 Infrared converted camera and make a view images.  Normally, I would use IR when there were a lot of green leaves but I thought this might be interesting!

Moving along I started to see more of the light just skimming the tops of some of the dunes.

I thought that an even more intimate view would bring out that sensual feel that the dunes are famous for.

After having zoomed in I went back to the Nikon Z6 and the wider lens to get a bit more of the landscape.

As I walked along I realized the sun was quickly changing the color of the dunes so I went back to the D850.

Along the way, I pulled out the IR camera as there were a few mesquite bushes visible.   I was surprised to find that they glowed very bright in IR even though the actual leaves are small and a silver-green color.

As I caught up with the group, I noticed they were setting up along a rather tall dune ridge.

I just had to capture that curve that the sun was making so distinct.

Once I was up on the ridge of the dune I set up my tripod as we got ready for sunset.   All of the following images were shot from the same spot as I moved the camera angle and zoomed in and out.  The light was changing quickly as well. I converted some to B&W to show the contrasts.

I tried some underexposures which I don’t do very often but this one worked!

Underexposed worked so I tried overexposing!

After sunset, the sky, although cloudless, did light up with some color.

As it started to get dark I made one last image of the dunes with the last light turning them a magenta color.

We then walked to another high dune ridge and set up to shoot the night sky.  It was so clear out there!  As darkness fell the starlight brightened the sky!   Michael Frye set up a couple of Lume Cube lights over to the side of a large dune that we were facing.  We were able to use the dune as a foreground for the night sky.  I switched cameras so I would have my widest lens in use.  Note:  Changing lenses out on the dunes even if there is no wind is not a good idea, so I brought 3 cameras with lenses attached!

That afternoon one of the other instructors, Joshua Cripps, had mentioned a night sky phenomenon that I had not heard of before.  He told us that a Zodiacal Light should be visible right as it got dark enough to see the stars.  I turned away from the dune that everyone was shooting and saw this triangular light at the horizon.  That was a Zodiacal Light!

With the clear sky, I had to try for the Milky Way.  January is not the best time in the Northern Hemisphere for the Milky Way as the Galactic Center is over us during the daytime so we can’t see it but I wanted to get at least part of the Milky Way!

At this point, it was about 7 PM!  The instructors asked everyone what they wanted to do and the consensus was to trek back to the cars.  I was glad for a couple of reasons… It was starting to get cold and we had gotten up and climbed around Twenty Mule Team Canyon very early that morning so I was TIRED!   So I packed all my cameras in my bag which I don’t usually do… I always want a camera handy!  But it turned out it was a smart thing to do.  As we made our way back out of the dunes, single file with our headlamps on, following Michael and his GPS, we came around the last dune and were hit in the face with a wind that was at least 10 degrees warmer than it had been a moment before.  Plus, the wind was full of sand and it was blowing in our faces as we headed to the cars!  So if we had stayed out on the dunes any longer we would have been out there in a sandstorm trying to follow the footprints of the people up ahead as those footprints were blown away!   We were lucky that night!

As we drove back to the resort trying to get the sand out of our eyes and mouths, we were wondering how they would serve dinner in our outdoor dining area with all that wind!   No worries, as we got within about a half-mile of the resort the wind stopped and we had dinner as usual under the stars!

After dinner, I downloaded my images and was extremely happy with my Mesquite Flat Sand Dunes images!   I hit the bed and slept like I had hiked over hills and dunes all day!

The Mesquite Flat Sand Dunes are a must-see when in Death Valley.  Be sure to take a GPS with you when you walk out there!  Also, walking in the sand can cause toe blisters (from trying to grip as you walk)… use blister tape on your toes to prevent that!

My next blog will be from the next early morning location, Salt Creek Trail.

Click on any image to see a larger version OR visit my gallery to see and purchase prints of these and additional images: Mesquite Dunes 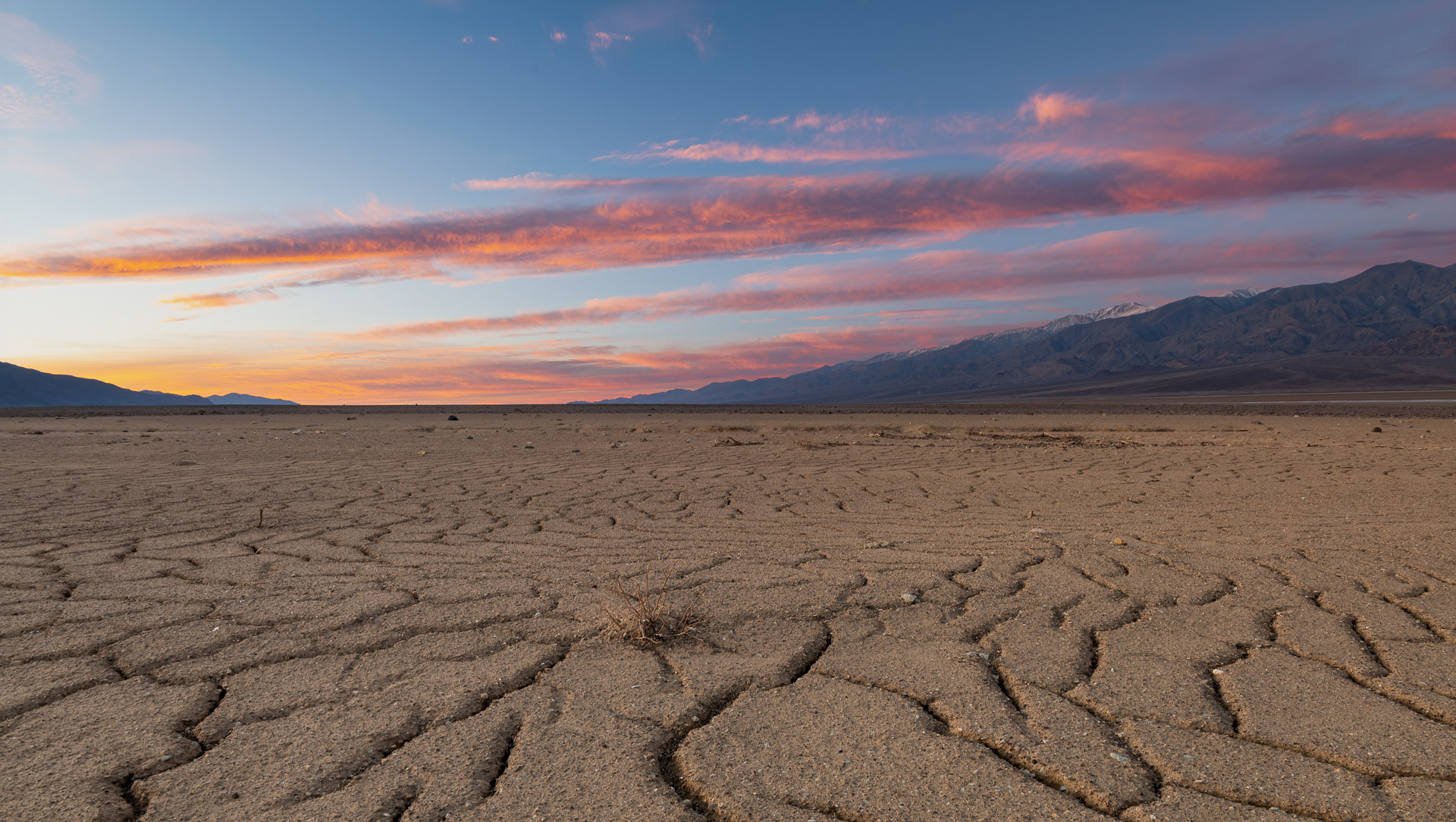 Very early on our third day, we met our instructors in the resort parking lot and headed out along Badwater Rd.  We stopped along the road not far from the exit from Artist’s Drive.  The “playa... 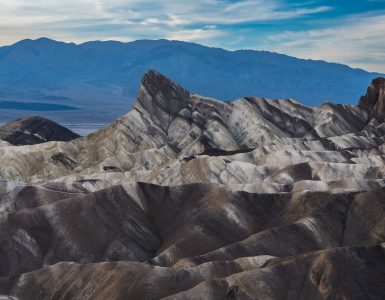 Our late-afternoon destination was not far from The Ranch in Death Valley.  Zabriskie Point is one of the more popular locations, partly because it has a relatively large parking lot and even a restroom!  It has been... 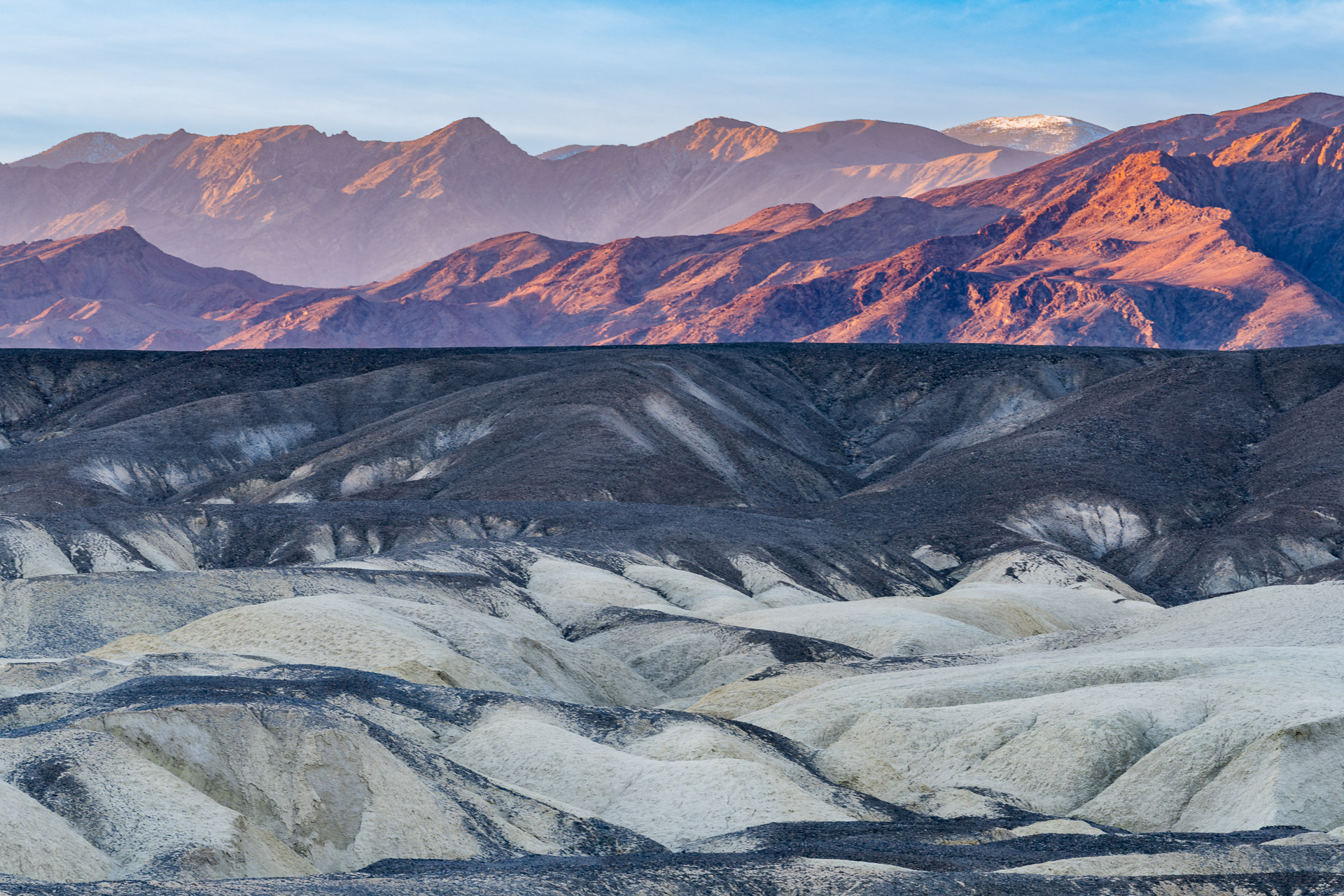 Very early in the morning, before sunrise, with our headlamps on, we hiked the Salt Creek Trail.  There is a boardwalk through the more soggy, yes, soggy parts of this area.   I could hear water running along the...