Another of the places that was on my list of must see locations while in Yellowstone National Park was Mammoth Hot Springs.  This area is a bit of a drive in the northern part of the park but it is well worth the drive!  Number one thing!  The pictures do not do this place justice!  Grand Prismatic Spring was otherworldly, Mammoth Hot Springs was another whole world!

From the West Gate of Yellowstone, we took a long winding road, that at that time, was under construction.  It was a bit rough on the vehicles but the views we saw along the way were worth it!

Along the road to Mammoth Hot Springs. 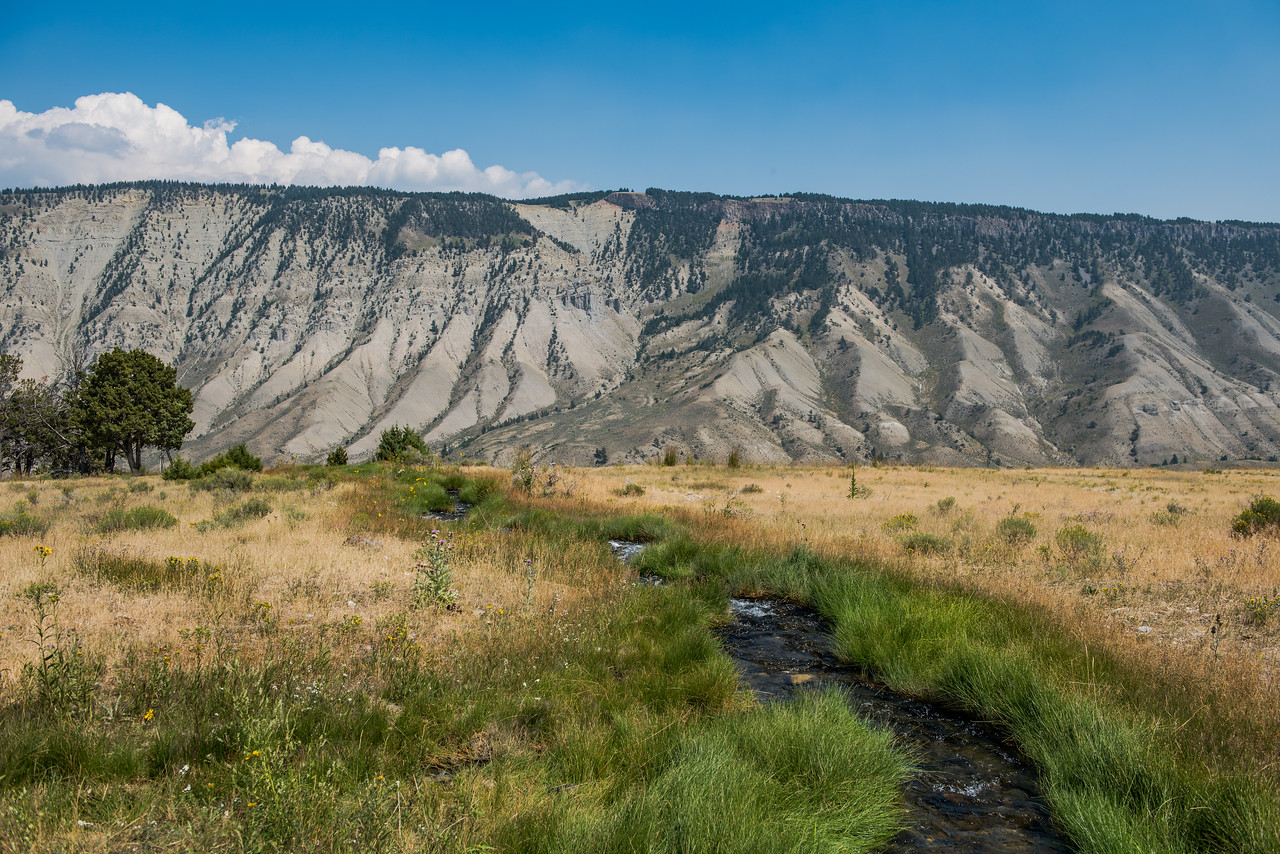 Cross the road from Mammoth Hot Springs. The stream was water coming off the terrace below.

These were some pretty normal looking landscapes for this part of the park but turning 180 degrees from the image above was this!

Our first view of what was to come!

This was the view that gave us a preview of what we were about to see!  We walked down across the road and through a parking lot to the base of a very long stairway!  It was not easy (I think I ended up with about 18 floors on my Fitbit that day!) but it was worth every step!

The travertine terraces were huge and the color was intense.  There was hot water flowing down all over.

Some details on Mammoth Hot Springs from Wikipedia:

Mammoth Hot Springs is a large complex of hot springs on a hill of travertine in Yellowstone National Park adjacent to Fort Yellowstone and the Mammoth Hot Springs Historic District. It was created over thousands of years as hot water from the spring cooled and deposited calcium carbonate (over two tons flow into Mammoth each day in a solution). Because of the huge amount of geothermal vents, travertine flourishes. Although these springs lie outside the caldera boundary, their energy has been attributed to the same magmatic system that fuels other Yellowstone geothermal areas.

View of the terraces made of crystallized calcium carbonate

The hot water that feeds Mammoth comes from Norris Geyser Basin after traveling underground via a fault line that runs through limestone and roughly parallel to the Norris-to-Mammoth road. The limestone from rock formations along the fault is the source of the calcium carbonate. Shallow circulation along this corridor allows Norris’ superheated water to slightly cool before surfacing at Mammoth, generally at about 170 °F (80 °C). Algae living in the warm pools have tinted the travertine shades of brown, orange, red, and green.

Thermal activity here is extensive both over time and distance. The thermal flows show much variability with some variations taking place over periods ranging from decades to days. Terrace Mountain at Mammoth Hot Springs is the largest known carbonate-depositing spring in the world. The most famous feature at the springs is the Minerva Terrace, a series of travertine terraces. The terraces have been deposited by the spring over many years but, due to recent minor earthquake activity, the spring vent has shifted, rendering the terraces dry.

The Mammoth Terraces extend all the way from the hillside, across the Parade Ground, and down to Boiling River. The Mammoth Hotel, as well as all of Fort Yellowstone, is built upon an old terrace formation known as Hotel Terrace. There was some concern when construction began in 1891 on the fort site that the hollow ground would not support the weight of the buildings. Several large sink holes (fenced off) can be seen out on the Parade Ground. This area has been thermally active for several thousand years.

The Mammoth area exhibits much evidence of glacial activity from the Pinedale Glaciation. The summit of Terrace Mountain is covered with glacial till, thereby dating the travertine formation there to earlier than the end of the Pinedale Glaciation. Several thermal kames, including Capitol Hill and Dude Hill, are major features of the Mammoth Village area. Ice-marginal stream beds are in evidence in the small, narrow valleys where Floating Island Lake and Phantom Lake are found. In Gardner Canyon one can see the old, sorted gravel bed of the Gardner River covered by unsorted glacial till.

Part of the huge travertine terrace.

The textures and patterns in the water below the boardwalk were so different I just had to capture that as well as the big picture.

Textures of the mineral deposits and plant life that lives on these hot pools.

The surface sparkled even through the water.

Sparkling mineral deposits under the water,

We continued on up even more stairs to reach the top.  There had been a large colorful pool up there previously but that had changed and the area was pretty dried up.

Older pools at the top of the Mammoth. Notice the dead tree being covered by the mineral deposits.

But as we continued on over the top and came around to the side, we were actually on the opposite side of what we had seen as we parked our vehicle.   The boardwalk came to an abrupt stop with a relatively small viewing platform of a view that was as spectacular as the Grand Prismatic but totally different!

There was hot steaming water flowing over the edge creating this cascade of white, red & orange.  The small pools that formed on the terraces were a light turquoise!   I could have stayed here and made image after image but the platform was so small and other folks wanted a chance to see this incredible sight!

So I took a couple closer images of the structures and then went on back up the boardwalk.

Hot Water streaming down the terraces.

I received a call on my cellphone (for some reason I had service in that one spot) from our leader, Andy, telling us to head back down as we needed to grab some lunch and then head to our next destination, Lamar Valley, which will be my next post (Part 8).

There were some other terraces and structures we did not get to see but I am thrilled with the images I made of the terraces we did see!

For more info on the Mammoth Hot Springs area visit the website.

Please visit my gallery for these and additional images from this amazing geological wonder!