The last time I was at Longwood Gardens, nine years ago, the main Fountain Garden was a bit of a mess.   Since then they have made some major upgrades so now  the fountains are back to their original glory!   I spoke with one of the many volunteers and she said they had removed everything and made copies of the pieces that were still intact.  They worked to recreate the fountains and gardens to be similar to what it had been! They did an amazing job.

At the front of the Fountain Garden there is a building that is built into the side of the hill.  There is a large fountain on top.  The really unexpected find was the fountain inside the building!

During the day they have periodic fountain shows with a variety of types of music.  But they were advertising a spectacular fountain show at night that had actually just had it’s first show of the season, the night before!

After making images in the hot and muggy afternoon (see Part 1), the first day I was at the gardens, I had to decide if I would come back that evening for the Festival of Fountains Show.  I checked into my hotel, cooled down a bit and decided to go back to the gardens for the show.  I am so glad I did,  as there were severe rainstorms the next 2 nights.

I decided to grab something to eat at the gardens (the food was awesome), so went back somewhat before dark.  I was very surprised to see that many people were staying and as it got closer to show time, even more people were arriving!  Many visitors brought blankets and chairs to place on the grass and walls on the ground level of the Fountain Garden.

Since there were so many people I looked for a good vantage point where I could set up my tripod and still be out of the way of all the people.  The upper level in front of the conservatory was perfect.  There was a spot right at the front wall next to the entrance to one of the “seating sections” where the volunteer said I could use my tripod.   I began taking images of the fountains as the light started to fade.

More & more people gathered on the lower level, along the upper level wall and in the upper 2 seating sections.

When it was finally dark, the show began!   We enjoyed over 45 minutes of color, water, fire, lights, music and dialogue.   From the colors in my images, use your imagination and you will hear the music and words of the characters in the classic movie “The Wizard of Oz!”  Of course there was the rainbow!  There was green for the Emerald City and red for the ruby slippers!  And oh so much more! 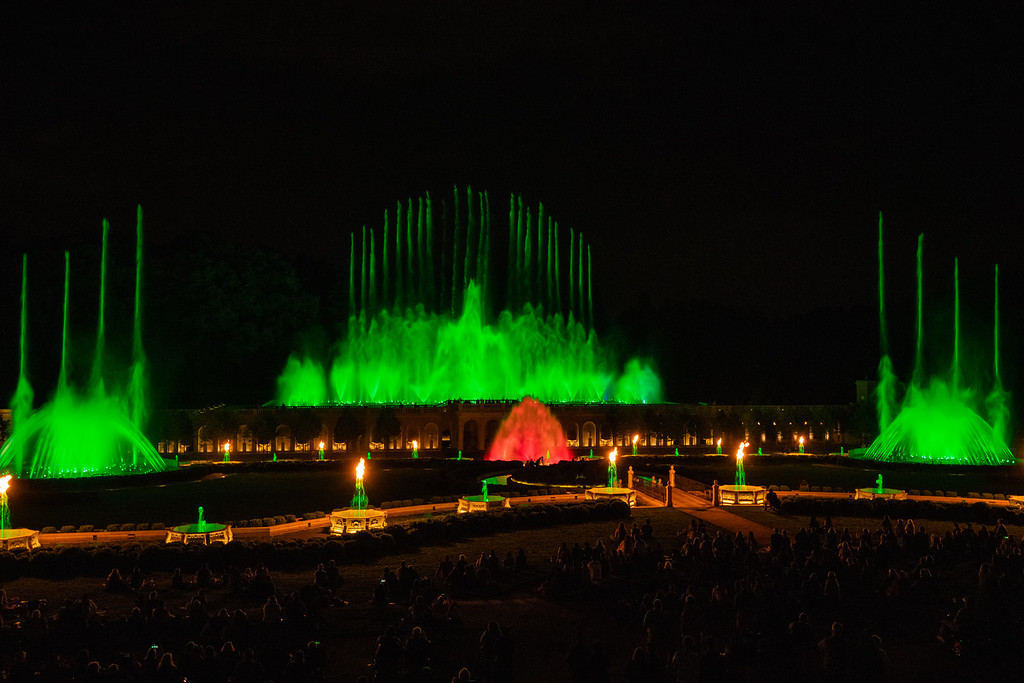 The volunteer told me that they had other fountain shows ready for the summer season. One mentioned, was the “Women of Music”.   I would have loved to seen and heard that one!

After the show I had to get one last image of the conservatory!  It is pretty cool looking at night!

The Festival of Fountains show runs through September 30th so if you are in the Philadelphia area, check out Longwood Gardens’ flowers but also stay (or go back) for Fountain Garden fountain show!  Or catch it next year!

For more images of the Fountain Garden Festival of Fountains Show, please check our my gallery.

For more info on Longwood Gardens visit their website.